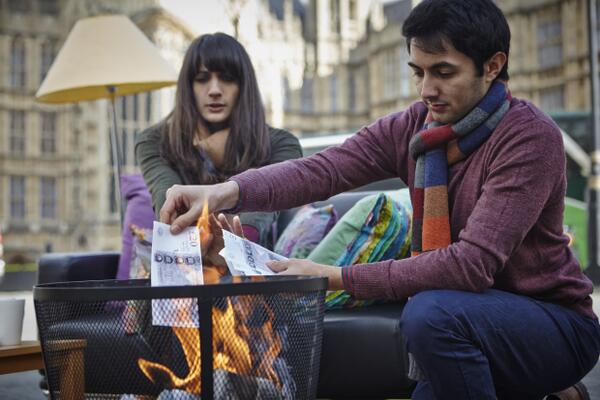 Millions of British families could stop paying their gas bill today and not pay a penny more for gas to their energy company until next winter, if only their homes were made properly energy efficient, according to new research.

•   Friday 14th February is Burning Cash Day – millions of families could effectively stop paying their gas bill from today until next autumn, if only their homes were better insulated and more efficient.

Truly effective insulation and efficient heating could slash well over a third off many families’ heating bills, a gigantic annual saving of up to £653, according to new figures from the Energy Bill Revolution, the world’s largest fuel poverty campaign.

The £653 saving could be made by a family living in a typical badly-insulated family home, and is equivalent to the entire bill for heating and hot water for seven and a half months, from 14th February until the new heating year begins next October.

February 14th has been branded Burning Cash Day – the day after which millions of British people are effectively burning money to stay warm.

Britain has among the worst-insulated homes in Europe. This country is second only to Estonia for fuel poverty due to appalling standards of energy efficiency.

A third of all UK homes (6.7 million) are rated E or worse on their energy performance certificate, meaning they have a poor standard of energy efficiency.

Campaigners today call on the Government to make energy efficient homes an infrastructure priority, helping every family in Britain to dramatically cut their heating bills and eliminating fuel poverty once and for all.

“Burning Cash Day shows the colossal amount of money wasted by British households due to the appalling level of insulation of the UK housing stock. Energy efficiency is far from sexy, but there is simply no other way to save so much money off our heating bills.”

“The Government needs to wake up and realise that this is a massive vote winner. A truly ambitious programme of insulation for Britain’s homes would give millions of people a huge saving on their heating bill, eliminate fuel poverty at a stroke, and give a fantastic boost to the building industry.”

“It’s a national scandal that there are thousands of excess winter deaths every year are due to cold, damp homes. The current weather conditions won’t be making things any easier for families struggling to stay warm.

“The Government must commit to a large-scale, energy efficiency programme to insulate every home in Britain.

“Energy efficiency is win-win. It’s great for the economy, great for households, and great for the environment – politicians should be falling over themselves to make it happen.”

The Energy Bill Revolution, representing almost 200 of Britain’s biggest businesses, unions and charities, is calling on the Government to pay for the scheme using Carbon Tax, which will bring an average of £4bn a year over the next 15 years into Treasury coffers.

The UK already recycles billions in tax every year to support energy supply but so far the Treasury has refused to hand back Carbon Tax to help households save energy by insulating their homes.

A Government-funded insulation scheme would provide a massive boost to the construction industry. It would provide up to 130,000 jobs at building firms around the country, and would offer a bigger boost to the economy than equivalent spending on roads or rail, according to figures from Cambridge Econometrics.

“Improving the energy efficiency of our homes will not only slash heating bills for individuals and families, it will also give the construction industry a powerful shot in the arm. Small local builders were particularly badly hit by the economic downturn and although we are starting to see signs of a tentative economic recovery, it comes from a very low base. SME builders are ideally placed to carry out energy efficiency improvements and government must make our existing homes its number one infrastructure investment priority to secure a sustained economic recovery.”

1. The research published today takes the example of a typical home: a three-bedroom, semi-detached house, which is the most common type of home in Britain. The £653 saving would be made by a home with a low standard of efficiency, rated E on its Energy Performance Certificate. The saving could be achieved with the following modifications:
• Loft insulation
• Cavity wall insulation
• Factory-insulated hot water tank
• Cylinder thermostat
• Improved heating controls
• New condensing boile

2. The exact date of Burning Cash Day for each individual home will vary depending on level of efficiency, but even a home that has the typical D rating for energy performance could still save £300 through energy efficiency measures

3. Britain’s homes are some of the worst-insulated in Europe. The UK is second-only to Estonia for fuel poverty, and a greater proportion of people die because of the cold in this country every winter than in Sweden

4. When asked what the Government should spend its infrastructure budget on, 85% of Britons said free energy efficiency measures for homes should the Government’s priority. (TNS research, November 2013

5. When asked what they would spend the money saved by better insulation on, a third (33%) said they would spend it on household essentials such as food shopping. (TNS research November 2013

6. Government spending on energy efficiency is falling. Spending in 2014/15 will be 25% below the 2010/11 level
7. A nationwide super-insulation programme could create 130,000 jobs, and bring more economic benefits than comparable spending such as roads or railways, according to a study from Cambridge Econometrics.

MPs supporting the campaign
1
8
8
Click for full list of MPs supporting
The only permanent solution to drive down energy bills and end fuel poverty.
© 2014 E3G All Rights Reserved
Digital Agency